Winner of the unanimously 1st Prize in the XII Edition of the “Torneo Internazionale di Musica” (Rome, 2006) and the unanimously 1st Prize in the International Harp Competition “V. Bucchi” (2009), Cristina Montes Mateo is recognized as one of the leading harpists of her generation throughout the world. She has also won top international prizes at the “Arpista Ludovico” International Harp Competition (Madrid, 2005), the “International Nippon Harp Contest” (Tokyo, 2007), and the prestigious Concours International de Harpe “Lily Laskine”  (Paris, 2011); as well as numerous national harp solo competitions like the “Jeunesses Musicales” Competition (2003) or “Victor Salvi” Special Prize at the “Arpa Plus” Contest (2001).

She follows an intensive career as a soloist with a great success around the world. She usually appears with major orchestras like the Ensemble Orchestral de Paris, Philharmonic Orchestra of Málaga, Francisco de Miranda Orchestra in Venezuela, Orchestra of the Theatre für Niedersachsen Hannover in Germany, or the Santiago de Chile Orchestra; under the direction of B. Haitink, Sir Colin Davis, G. Prêtre, P. Boulez, or D. Barenboim. She performs at many world leading festivals like “Les Flâneries Musicales de Reims” (France, 2010), the “7th International Harp Festival” in Rio de Janeiro (Brasil, 2012), or her most recent success at the Royal Palace of Madrid (Spain, 2015), in a concert offered for the King and the Queen of Spain and the President of the United Nations and broadcasted internationally. She has also played at the Berlin Philharmonie, Royal Albert Hall of London, Tonhalle in Zurich, Théatre du Châtelet of Paris or the Carnegie Hall of New York.

She is currently Solo Harpist at the Orquestra de la Comunitat Valenciana in the Palau de Les Arts Reina Sofía, an orchestra created by Lorin Maazel and conducted also by Zubin Mehta, Valery Gergiev and Riccardo Chailly. She has also been Principal Harp with the Munich Philharmonic Orchestra and the Royal Liverpool Philharmonic Orchestra.

A sought-after teacher, she is also head of Harp Department at the Conservatorio Superior de Música “Joaquín Rodrigo” of Valencia (Spain). She also gives Master classes at the renowned institutions of Berklee College of Music (2014, 2015, 2016), the Birmingham Conservatoire (2015), or the Musikhochschule für Musik und Tanz in Cologne (2016).

Cristina Montes Mateo also serves as adjudicator of main Harp Contests. She has been one of the jury members of the 12th and 17th Edition of the famous “Arpa Plus” Competition held in 2010 and 2015, as well as a permanent jury member of the harp auditions at the National Youth Orchestra of Spain since 2012.

In the words of Lorin Maazel (2009), “… she is a virtuoso harpist and extremely musical…”, in the Daniel Barenboim’s words (2009), “… I consider her playing to be of a very high technical level and to be a very fine musician. I am delighted…”, or in Plácido Domingo‘s words (2016), “… I have met and heard thousands of musicians but I can highlight only one of them in the harp world: Cristina Montes Mateo.”

Top newspapers and magazines like the well-known “Magazine” (2007) have echoed her whole career and success, together with other classical music international magazines like “Ritmo” (2013).

One of her most important works is her Album “Obras para arpa” (2012), with eleven premières by Spanish women composers. Her recently released Solo Album “Voyage” (2017) has also become a huge success in critics and audiences.

Nowadays, she is living in Los Angeles where she shares her Solo concert agenda with the recording sessions in the greatests Studios in Hollywood.

Her upcoming engagements in 2017 will take her to the Walt Disney Concert Hall, Auditorio Nacional de Madrid and Hollywood Bowl. 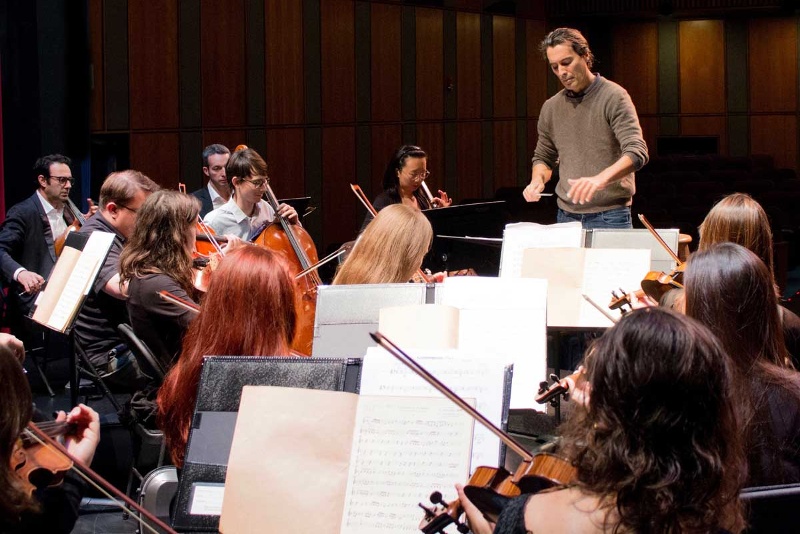