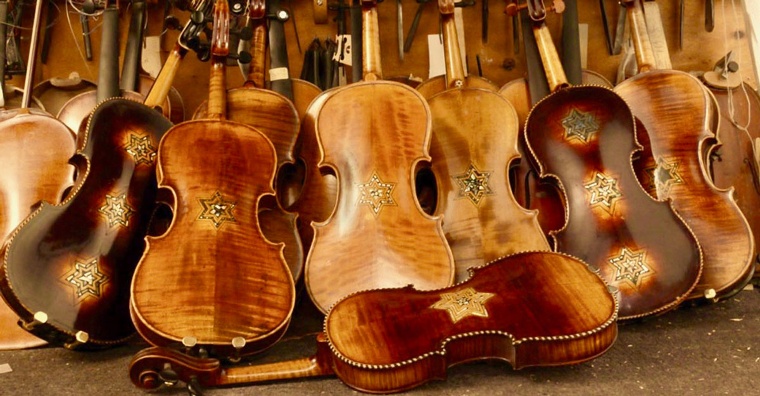 Violins of Hope is a project of concerts based on a private collection of violins, violas, and cellos collected since the end of World War II. All of the instruments belonged to Jews before and during the war. Many were donated by or purchased from survivors; some arrived through family members, and many simply carry Stars of David as a decoration and an identity tag that declares: we were played by proud klezmers.

All instruments have a common denominator: they are connected with the war. To be more specific, they had to do with the Holocaust – death or survival. And hope.  All the instruments were symbols of hope and a way to say: remember me, remember us. Life is good, celebrate it for those who perished, for those who survived.  For all people.

Violin-makers Amnon and Avshalom Weinstein, father and son who work in Tel Aviv and Istanbul, own the collection. They dedicate their expertise and endless love to ensure that these instruments, most of which were rather cheap and unsophisticated, get a beautiful makeover. But that is not enough: they also gain a fantastic new sound, worthy of the best musicians and large music halls.

The Nazis used music, and especially violins, to humiliate and degrade Jews in ghettos and camps.  They confiscated many thousand of instruments from Jews all across Europe. Our concerts are the ultimate answer to their plan to annihilate a people and their culture, to destroy human lives and freedom.

The sound of violins is often compared to the beauty of the human voice.  When played with talent and spirit, it can reach out and touch hearts. This was the role of violins during the war – to touch hearts, to kindle hope for better times, and to spread it around. Wherever there was music, there was hope.

Our violins present the victory of the human spirit over evil and hatred. As many as 6,000,000 Jews were murdered in WWII, but their memory is not forgotten. It comes back to life with every concert and every act of love and celebration of the human spirit.

Violins of Hope is not only a memorial to a lost culture and people, it is also an educational act that reaches young students and adults wherever our concerts are performed. In recent years, some of the world's finest orchestras have held Violins of Hope concerts, including the Berlin Philharmonic, the Cleveland Symphony, and many others.

Each concert brings together people of all faiths and backgrounds. Each project is accompanied by an extensive educational program. We visit schools and hold narrated concerts. We tell the history of some instruments – such as the violin that was thrown out of a cattle train on its way from France to Auschwitz; the violin that was buried under the snow in Holland; the violin that saved lives of people who played in a camp orchestra and survived. So many stories, so much history.

Our project offers also an exhibition of 20-to-30 instruments and their individual stories, as was done in Charlotte, NC, in The Maltz Museum of Jewish Heritage in Cleveland, OH, in the lobby of the Berlin Philharmonic, and soon in Nashville, TN.